My first time kiteboarding with a stoma1 was nerve wracking. I didn’t know what to expect. I had done all the rehab to strengthen my core, so I wasn’t really worried about getting a hernia at this stage. I was more worried about how the pouching system would hold up with all the movement, the wetsuit, and the harness. I wear a waist harness, which would be above the stoma and bag, but was worried it would slide down and put pressure and possibly break the seal on the bag, or even somehow damage the stoma site.

For my first session I wore a full length 4:3 wetsuit2. Under the wetsuit, I wore my regular ostomy bag, but over the bag I put on ostomy armour. My ostomy armour is a thin metal plate with a 1 inch thick foam backing, protecting the stoma from impacts. There is a keyhole cut out of the foam that the stoma fits into and is still able to function and drain into the bag.

So with my gear ready, I was set to hit the water. I was so excited. I hadn’t been out kiting since the previous summer, and my health was so bad, it hardly counted as kiteboarding.

The wind was very light, and I was pretty underpowered the entire time. But, I was kiteboarding, and I was stoked! It felt so good to get on the water. The feeling of dipping my edge in, and powering up the kite and cruising along. Mentally I was soaring. A massive weight was lifted off of me. I can do this again! I even tried jumping a couple of times! But a combination of light wind, and my poor edging left me with some really small jumps. I guess I am going to have to work on my technique!

As I was riding, I noticed a couple of issues happening with my harness and bag.  My harness was sitting a little too low, and the armour was sticking out a bit more than I imagined it would, so those two things were bumping up against each other, causing me some discomfort. Not only was it uncomfortable, like a soft jabbing, but it was making me worried that the bag was somehow coming off inside my wetsuit.

While usually I find that the armour helps to secure the bag by applying pressure and holding it firmly against my body, it proved detrimental for kiteboarding. My waist harness applied a bit of downward pressure on the armour, and because it sticks out so far, instead of pulling into me, it tended to push straight down. I thought for sure that my bag had come off in my wetsuit, and that I was in for a major cleanup!

I came in, landed my kite, grabbed my extra ostomy supplies and headed for the porta-potty on site. I carefully rolled my wetsuit down to inspect the damage. And sure enough, the edges of the baseplate securing my bag had come up considerably, and while I didn’t leak anywhere, it was a close thing. Had I stayed out much longer, there is no doubt the bag would have come completely off. As the seal was compromised, I opted to change everything to avoid any potential risk of a leak.

I am still fairly early in my days with an ileostomy3, so I haven’t had to be too adventurous with where I change my bag. Up to this point, I have always changed it on my schedule, in my own bathroom where I am familiar with everything. If I make a mess, no worries, there is a shower right beside me, and I have everything needed for a cleanup job. So with the wetsuit pulled down to my waist, and supplies ready to go, I managed to change into a fresh bag without incident. How is that for a confidence boost! I managed to avoid getting poop on, or in my wetsuit, I’ll take that as a victory!

1 A stoma is a surgically created opening in either the large or small intestine that allows for waste to bypass the rectum and drain into a bag.

3 Ileostomy is a stoma constructed by bringing the end or loop of small intestine out onto the surface of the skin, or the surgical procedure which creates this opening. Intestinal waste passes out of the ileostomy and is collected in an artificial external pouching system which is adhered to the skin.

17 thoughts on “Kiteboarding With an Ileostomy – Part 1” 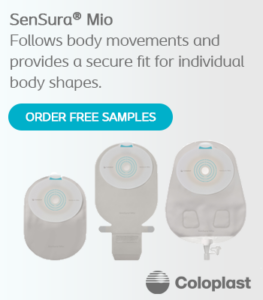